HAMID movie review: A befitting addition to the legacy of Vishal Bhardwaj's Haider 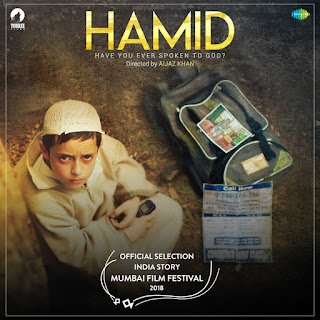 Disclaimer: A dear friend, Ravinder Randhawa, wrote this film, so cannot be objective or clinical while writing this review - actually I am too emotional at the moment. No spoilers here.

Let me warm you up to this piece by showing you the trailer here:

If the second song made you cry,  I can understand - the song is like that. Take a break and come back to this piece on director Aijaz Khan's film, 'Hamid,' that has released in theatres this weekend.

Let me give you an explanation for the headline of this piece - I am an ignoramus, and my worldview comes from the films I watch. For me, Vishal Bhardwaj's 'Haider' was baptism by fire into what's happening in and around Jammu-Kashmir. Judge me, I don't care. 'Haider' also prepared me as to what to expect from 'Hamid'. A 5-minute standing ovation for all those who ensured that the Kashmiri accented Hindi was spot on, if 'Haider' is the gold standard.

The opening scene of 'Hamid' planted me deeply into its universe. I think it is devastating to be probed and questioned regarding your identity by random strangers (in the form of army personnel). I don't know why they, both in 'Haider,' and now in 'Hamid,' are shown as cocky, rude blokes who are unhappy in their lives. I know there are and will be exceptions, but mostly that's the scenario. Okay let's get back to little Hamid (the lovable, innocent boy played by Talha Arshad Reshi) and his screwed up paradise.

Hamid is as influenced by his father, as I am by Gulzar Saab and most of his legendary works. In the beginning we see an old craftsman painstakingly making a boat with a song on his lips - I smiled wide thinking of the blessing every artist has while in the process of creation. All us artists live for moments like these, the fee may be pittance - hundred rupees a month in little Hamid's case - truth be told, not too different from what I make as a writer.

Little boy Hamid is perhaps the sweetest and purest soul in the realm of the film, his father comes a close second - or vice versa. Hamid's mother (played by a brilliant Rasika Duggal) on the other hand has become cynical and bitter and I hated her from the word go. But what else to expect from a human who has been living in the harshest conditions - both politically and financially. She smiles perhaps once when Allah comes to her rescue via Hamid.

'Hamid' the film is loaded with metaphors, both sublime and sometimes it feels like how one would after walking into a glass door. The metaphor marathon begins with a metaphor on how the color red suits the Jhelum river and ends with a red on Jhelum but on the hopeful spectrum of emotions. Aijaz's film is an emotional roller coaster, and there's never a dull moment other than few poetic silences. I think I will watch many times over just to soak in all the metaphors.

I have always been in awe and regard of Ravinder sir's writing, but after watching 'Hamid' my respect for sir shot through the stratosphere - his brilliance, to employ a metaphor, lies somewhere between the sun and the stars. Sir's influences are bigger legends like Faiz Ahmed Faiz and Paash to name just two. His wit and sharpness can be sampled in the first song I shared - 'Sursuri ye chaai hai...' and we have been lucky to sample many of his creative endeavors. Some samples here:

And this one too:

I had read a saying, "One man's terrorist is another's tourist," or something to that effect. 'Hamid' the film showcases just that in a very poetic, visually delicious and in a very balanced way. In between the terrorists and the tourists, the ones most hurt in the entire scheme of things are the people living in their paradise lost. By now, I think I guess I know why the army personnel are shown as cocky and rude, as they are hated by both, the terrorists and the local citizens.

The only ones they get love from, they are away from, for most of their working lives. How tragic is that! If you had money to just watch one film this year, please buy that ticket for 'Hamid'.

Spot Rani in this video: