Tumhari Sulu: Would Sulu be the same without her Ashok? 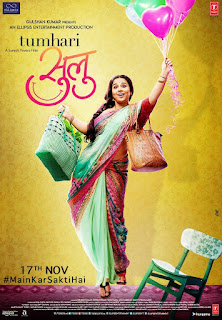 Greetings after a long time… neither did I watch anything that moved me as much to write home about, nor did anything significant happen that I felt like sharing here. You see, life as a home-bound guy doesn’t offer any major insight or even material to observe and mull over. Having been unwell and lost too much body weight, I prefer to stay indoors, eat my proteins and other nutritious miscellany without complaining much about the tastelessness of it and the pointlessness of life in general.

Disclaimer: This piece is NOT a review of ‘Tumhari Sulu’ – I am just writing this piece because of the unusualness of the character Ashok who plays the husband of the protagonist Sulochana aka Sulu. I don’t remember meeting a guy like him on celluloid in the recent past, even the distant past. I watched ‘Tumhari Sulu’ last Friday because Rani (my wife) plays the ‘Race Participant No. 1’ in it. My views about the film might be biased, so I refrain from writing about it.


The character ASHOK is perhaps a new arrival or a re-arrival in the Hindi film scenario but why stop just there? I don’t know anybody in my / our generation who is as unbelievably nice, almost unreal as Ashok – I felt like he has jumped straight out of the collective imagination of all the girls / women I know. As many who have watched the film have concluded, our man Ashok is the text book definition of an ideal man, especially in these troubled times that we are living in.

I also write this because of the discomfort that I saw on the faces of those male friends / acquaintances who had watched ‘Tumhari Sulu’ and were left visibly uncomfortable (for the lack of a better description) by this guy Ashok they watched on the big screen. While it was easy to celebrate Sulu’s journey from the lemon race track to the RJ console, it was almost impossible to pin down Ashok, his goodness or the fact that he took way too long to even consider quitting his job.

The scales seem to have tipped in our cinematic Hindi universe – in all these many decades toughest standards were set for women, the men had it easiest. Post ‘Tumhari Sulu’ men have to deal with this aadarsh dreamboat and most of them (including me) are feeling at sea, a turbulent one at that. As I channel my anger towards director Suresh Triveni, I just want someone to tell me that he is a FAKE – one can’t be like him, perhaps can only die trying, best of lucks while at that.

One thing is for sure - Sulu can NOT be the same without her Ashok. Does this make 'Tumhari Sulu' the sweetest-yet-most-empowering-female-empowerment-fantasy-family-drama ever made? You tell me in the comments; eager to hear from you guys. 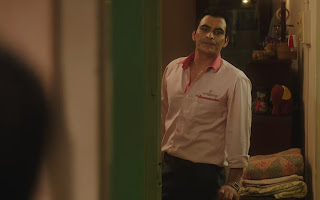 One of the very few times when Ashok came close to being one of us screwed up men was when he got drunk and came home. Even then his demeanor was out of place – while I was expecting him to create a scene and pass out while venting out his frustration, he does what only an imaginary guy like him would. Ashok gets chided by Sulu, lets her wash & wipe his head, and perhaps cries himself to sleep. (Read on ONLY if you've watched the film)

For my own good, I re-imagined this scene, just to normalize Ashok in my book. This is the bar scene and the precursor to it, as it played out in my head:

ASHOK has just entered the Bandra station to take a train back to his home at Virar. After the altercation at his workplace, he doesn’t look like his usual calm and composed self. There’s anger in his eyes that one gets to see in spurned suitors or betrayed soldiers.  As he tries to make his way into the first class compartment of the Virar fast, he seems like Sunny Deol on a rampage, but somehow fails to get in. While Ashok is waiting for the next train, a book vendor walks up to him and tries to sell him a ‘Rapidex English Speaking Course’ book – he gives the boy his angriest look and scares him away.

The next train arrives - this time Ashok has upped the ante and channelized his inner Hulk to ensure that he gets inside come what may. Once inside the packed compartment he finds himself standing next to two strapping young Bengali guys discussing their day in their mother tongue. By mistake one of the Bengalis steps on Ashok’s shoe, and that leads to a scuffle. Ashok vents out all the anger he had for his young new Bengali boss on both the Bengali stud boys and blackens their eyes.

ASHOK has seated himself in a comparatively quiet corner at the noisy bar and is waiting for the waiter to show up and take his order. The waiter shows up with a glass of water and inquisitive eyes, trying to size up his next prey. Little does he know that Ashok is a regular at the bar.

Just then Ashok’s bar buddy Dharmesh BHATT saunters in as if he owns the place. He hands one of the waiters a Rs.500/- note and orders a large Smirn Off vodka. Bhatt then walks towards Ashok’s table and conveniently plonks himself there.

Waiter arrives with Bhatt’s drink, places it on the table and leaves. The men clink their glasses and begin their session after ordering some chicken tikka. Ashok lights up a cigarette.

Well that was my humble attempt to make Ashok a little bit of a d*&k like most of us men. Can all men be like him? Hell no! Should we try? Hell yes! Will it make the world a better place? Not a single doubt there! To conclude, I hope and pray that every Sulu finds an Ashok to fuel her fantasies, to stand by her in every race that she participates in and most importantly - feel like a 50-50 partner in their businesses (family or otherwise), even when it is actually not. Mr. Suresh Triveni, thank you for gifting us cinema lovers an experience that will always be cherished.