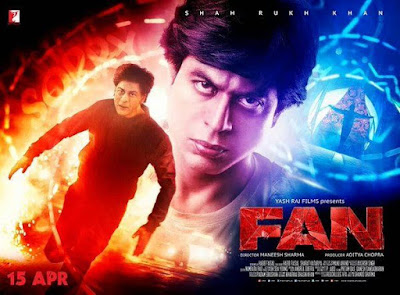 Disclaimer 1: Have been a huge Shahrukh Khan fan, just like many others, who discovered love with him, in Aditya Chopra's DDLJ.

Disclaimer 2: I still continue to love SRK, despite his films. His last film that I remember watching like a crazy fan was 'Chak De India' - I watched it at Urvashi theatre (Bangalore) seven times back to back, over a crazy weekend. Have lost count of times that I watched it on TV over the years.

I am few of the lucky SRK fans who watched DDLJ at Maratha Mandir in its 1000th week. It was an evening I will never forget, and like all other good things in life, I only have Rani to thank. Coming back to being a fan of Shahrukh, let me admit I have skipped most of his films post Chak De. India!. I took a leap of faith with Dilwale, but came back embarrassed. The SRK of Chennai Express & Dilwale are not the SRK that I had loved, and still continue to do so.

I don't know how this works, because an actor should be loved for his films, no? May be it is the thing that they call - connection - mera connection bhi solid hai. Post Chak De, India! I have only waited for his films for the interviews he gave (print and video all included) during the films' promotions. I know he has his justified reasons for doing the kind of films that he has been doing, but please count me out. Since Chennai Express was first announced, I thought that I will have to make do with his interviews and inspiring speeches only.

Things changed when Fan was announced, and I was privy to a little more info about the film than normal fans (again thanks to Rani). I thought it would be a game-changer for the Shahrukh the actor, that I loved to bits. After watching Maneesh Sharma's Fan, I can only say that, Shahrukh still can act - like the supremely talented guy that he is. To pull off a Guarav Chandna like he did, you have to be a bloody good actor - it's not every actor's cup of tea.

What do I say about Fan the film? It didn't work for me as a film, but as a fan of SRK, it was an eye-opener. It left my eyes open wide. I could not believe the spectacle that had unfolded in front of me. My Shahrukh had delivered a double whammy, both as Gaurav and as Aryan Khanna too! There is no point nitpicking the flaws of the film, but what I came back with was an actor so flawless, who took jokes at his own superstar image, in a way that only he can, and has been doing all these years.

As a fan it has always been embarrassing for me when friends poked jokes at most of his recent films, but now onwards, his double role in Fan will be my way to get back at haters. Thankfully I am not even a fraction of a fan like Gaurav in Fan, but I still try & defend him whenever I can, but how long could I keep on talking about Chak De, India!? Mr. Maneesh Sharma and Adi sir, thank you for giving us fans this film. We all owe you this one, big time.

Dear Shahrukh Khan, I love you... all over again.