We are all 'TRAPPED' 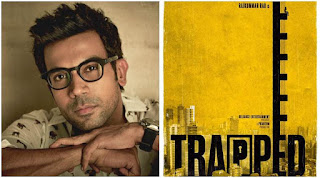 Note 1: God forbid what happened to Shaurya (A brilliant Rajkummar Rao) in Vikramaditya Motwane's 'Trapped' ever happen even to my worst enemy. Not that I even have friends to call my own in the first place, but you do get the drift of what I am saying.

Note 2: Bombay (Mumbai as it is now known as) is not a place that nurtures idiots. You earn your stripes by giving to the city, and in turn you earn your basic rights and other privileges.

Note 3: I never wanted to watch 'Trapped' - mostly because I am a happy guy talking about why I love the 'Rasam' or 'Garlic Naan' that Rani makes for me, far more than the 'Avial' she has perfected over the years. Eating ants and pigeons? AWAAKTHOOOO. That much anyone can imagine or see from what there is in the trailer already. Who pays to watch such stories? Well, I am one of those who do, if there are no dead insects, pests or birds involved. I even watched '127 Hours' - just saying.

The thing is that there's a trap - we are all trapped. Neither Bombay needs us, nor does Hindi cinema. Who are we? Why are we here? Is this because we are trapped? Who set the trap? Did we walk into it, perhaps like how Shaurya did in 'Trapped'? Why did Motwane make 'Trapped'? Did he want to liberate himself? Did Rajkummar want to taste blood? Literally or figuratively? I don't know. Should I bother to find out? Not my business, I think.

Watching 'Trapped' if you are in love with Bombay / Mumbai or the films made here, you will know that it is a HUGE trap. One doesn't even realise when we fall prey. It could be the keys to an empty room, the chance to date an engaged girl who might be getting married in a week or so, the chance to claim a piece of this city, however big or small,  as your own or even the privilege that you can expect an answer when you shout your loudest. The most horrific part of being here is that nobody wants to listen to you, as loud as you scream or shout.

Someone might hear you scream, but that doesn't mean anything - the noise of the city and the collective ones is so loud, he / she might just give up mid way. Most of the people here are tone deaf anyway. Hearing too much of radio does that to anyone of us. Perhaps the only way to drown out the cacophony of a city that doesn't even have the time to sleep. Just in case you do sleep, the sound of your dreams drown out anything else in the vicinity. You might not like this city, but when were you invited here in the first place? You came unannounced, so will be your exit.

If you don't belong here, neither the city likes you nor do the inhabitants.

PAV BHAAJI - the smell of it will remain if you have been in this city long enough. If very unfortunate, at worst you will savour the taste of Vada Pav or Dabeli long after you've settled back to the place that you came from, with or without the fortune that you came to make here. Can you shake up the City? Have you screamed loud enough? Did anyone hear you? Do they care? Do they want to see you again? The property guy who conned Shaurya in 'Trapped' knew his lessons way before hand.

This City has no place for fools.