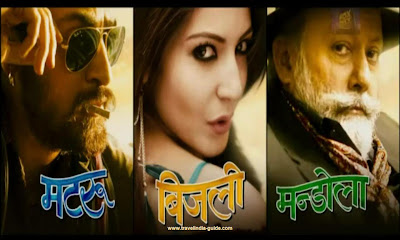 दो माह पहले
I came to know that short films will be screened at the Kala Ghoda Festival this year. The theme this time is – ‘Cinema For Change’. I thought a lot about it and came up with my satirical take on it titled – Ho Gaya Kalyan. This post isn’t about my first bona fide short; this has been triggered after watching Vishal Bhardwaj’s latest offering, मटरू की बिजली का मंडोला. After watching this insane trip to the back and beyond of civilization, I feel that my short film seems to be hopefully headed in the right direction.

पिछले साल की बात
I watched two films in 2012, Prakash Jha’s Chakravyuh and Bedabrata Pain’s Chittagong. The former was the pits, while the latter had me in tears towards the end. Chakravyuh had the so-called stars, item number, make out scene, big budget, but a shitty script and Chittagong just had Manoj Bajpayee, a passionate indie spirit and an amazing script. Needless to say, neither of these films found many takers when they released. पेंचो पेंचो!

One might argue that if not for Imran Khan and Anushka ‘Look ma I emerged from water half naked yet again’ Sharma, MKBKM would not get a wide release. But if it wasn’t for Pankaj Kapur, this film wouldn’t be an iota of what it has become. We need more filmmakers to write roles for him. JUST HIM. Imran worked hard to hide his face behind his face fuzz and Anushka worked hard to flaunt her legs, but Pankaj saab & Shabana Azmi stole their thunder from right under their shapely noses.

Here is one director who doesn’t give a damn about the kind of films his peers are making. He is running his own race, setting his own standards and not making a song and dance out of his travails. He silently works on his films, composes music and mentors talents that qualify in his league of cinema. With MKBKM he establishes once again, that nobody knows the North Indian rural milieu better than him. It is a sheer delight to watch the earthy set up and it wouldn’t be an exaggeration if you could smell the dung cakes when they were being hurled around in the film. Extra brownie points to this 'reluctant auteur' for employing the honeydew smooth voice of his better half when needed! AND he has the blessings of Gulzar Saab!!! Baadal utheya...

फिल्में खामखा नहीं
For me, the biggest learning after watching MKBKM is that films don’t have to be very realistic or completely brainless. If you have a point to make, go ahead and make it. Not everybody might get the ‘bourgeois bitch and commie bastard’ reference, but for some it will be the defining moment of the film. Obviously God is in the details, and not everybody has to notice everything. As long as they get the bigger picture and go back home with huge smiles pasted on their faces, the job of a Hindi filmmaker is almost done. The intelligentsia will get the subtle nuances at first and for the rest it might sink in on repeat viewings.

शर्तें लागू
I had read the script of MKBKM long back, and I must say that it was way funnier than the film that I watched this weekend. One of my most favourite lines from the script was:

Having said all that I had to, let me just say that the year 2013 has begun on a fantastic & laugh out loud note at the cinemas and I would highly recco this film to one and all. As far as I am concerned, the खामखा song captured not just the romance of Matru and Bijlee, it also highlighted the romance that the Maoists feel, when they commit themselves to the cause of their brethren.