This blog is dedicated to a friend I once had some two decades ago. I don't remember his full name, his first name was Suresh and he would proudly introduce himself as 'Sures, Bokaro Steel City se'. He was our roommate, I shared the room with Sures and another friend Nikhil who was a bully who came from a place called Behraich in Uttar Pradesh. While Sures had come to Bombay to learn multimedia, Nikhil was here to start his event management company. The only things common about Sures and Nikhil is that they both worked very hard, and both were hustlers of the highest order. 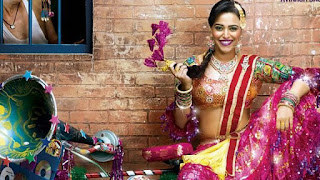 Today when I look back, for me they were the reason I never wanted to have anything to do with anybody from up north. I almost used to look down upon people from that region, and used to avoid them like plague. It was a promise I had made to myself - till the time I got to know much after falling in love with Rani, that she was born in Aarah. Much to my horror, Rani one day proudly announced, "Aarah jila ghar ba, kaun baat ka darr ba." Oh yes, Rani works extremely hard, and is a hustler too. Now that the hustling works in my favour, I have made peace with my Rani of Aarah origins.

If you've been following me on FB / Twitter, you'd know that these days I am extremely cynical about the state of Uttar Pradesh in the last few days. Not too far away from U.P., there's Aarah in Bihar, which seems to be dealing with its own demons. After watching Avinash Das' debut film, 'Anaarkali of Aarah,' I can only say that this place has perhaps been through worse already, or may be not - I am far too disconnected to even distinctly differentiate between UP & Bihar. I recently watched two well made docu-shorts about things that happen in Bihar. It perhaps prepared me for what to expect from 'Anaarkali of Aarah.' Watch the videos here, I think you'd love it too:

One of the highlights of 'Anaarkali of Aarah' is that it grabs you by the cojones and takes you into the lanes and by-lanes of Aarah so deep, that you can smell the shit by the roadside and the smell of the cow dung on the floor. From what I have seen in this film, I swear to God, I will never ever go to anywhere near Aarah or Bahraich. Other than the spirit of the people living there, especially the good ones depicted in the film, I didn't find the place welcoming at all. May be it operates in its own parallel universe, where the bad is good and the ugly is worshiped.

All this, and I have just begun. Hey wait, all that you need to know about this courageous work of art before deciding to watch the film, can be seen in the trailer:

Each and every performance in 'Anaarkali of Aarah' is pitch perfect, and will be remembered forever. Special mentions for Pankaj Tripathi, Sanjay Mishra and Ishtiakh Khan. A HUGE shout-out to Rohit Sharma for the spectacular music - if not for the music, the film might have not worked half as much. This is perhaps the strongest film made about women empowerment, and strangely makes 'Pink' fade in comparison. In this film there's no daddy figure to rub in the 'NO MEANS NO' message. Why do you need a daddy, if the daughter is strong enough to convey the message herself?

P.S.: Dear Swara, may God bless you, and give you more power to portray characters that are so ordinarily extraordinary and insanely empowering, genders be damned.
Posted by Magik at 11:38 AM